May is recognized each year as National Arthritis Awareness Month. Arthritis is a disease that impacts more than 50 million Americans, making it the No. 1 cause of disability in the country. That means one in every five adults, 300,000 children and countless families are affected by different forms of arthritis.

Gout, an extremely painful form of inflammatory arthritis, affects more than 4% of Americans and about 10% of men over the age of 60. It is more common in women after menopause. The disease occurs due to an excess of the bodily waste uric acid. The acid is deposited as needle-like crystals in the joints or in soft tissue. These crystals cause redness, swelling, stiffness and intense pain in the joints, which in turn can create gout flares.

More than 4% of Americans suffer from gout, a highly painful form of inflammatory arthritis

ColciGel is a new prescription medication for the treatment of acute flares of gout. It is a transdermal gel that contains homeopathic colchicine (colchicinum 4X) that is applied directly to the sites of a flare. ColciGel penetrates the dermal layer, resulting in the reduction of inflammation and pain associated with the flare.

Clinical experience has demonstrated the effectiveness of ColciGel in mitigating the symptoms of acute flares. ColciGel patients report a 50% or greater decrease in pain and inflammation within a few hours and improved pain relief with additional applications. Oral colchicine, on the other hand, is effective in only 38% of patients treated for acute flares. Moreover, oral colchicine is associated with poor tolerability due to a high rate of gastrointestinal effects, typically nausea, vomiting, abdominal cramps and diarrhea. ColciGel is well tolerated and, because it is transdermal, avoids the commonly associated adverse effects associated with oral formulations of colchicine.

Less common but more significant is a strong potential for drug-drug interactions with oral colchicine as it is metabolized and transported by hepatic cytochrome P450-3A4 and P-glycoprotein. Numerous other medications utilize this enzymatic pathway and transport system and can displace colchicine causing elevations in serum concentration to potentially toxic levels. Fatalities have occurred from these drug-drug interactions with oral colchicine.

ColciGel, due to the topical application of a significantly lower dose of colchicine, has demonstrated only sub-clinically relevant systemic absorption, serum levels less than 50 pg/mL. This is a 100-fold lower peak concentrations of colchicine than that reported for oral colchicine (about 6 ng/ml or 6,000 pg/ml) thereby significantly reducing the potential for drug-drug interactions.

The drug costs for the two treatments are very similar; however, oral colchicine therapy has the potential for large hidden costs associated with poor tolerability, serious adverse events (AEs), drug-drug interactions (DDIs), and treatment failures. ColciGel, without these hidden costs, should be a much more cost-effective treatment.

From 2001 to 2004, employees with gout incurred almost double the direct annual health care costs per year compared to employees without gout ($6,870 versus $3,705). With over 8 million people with gout in the U.S., the extra health care costs for people with gout are likely to be over $20 billion per year. Moreover, these costs are growing and are expected to be significantly higher in 2016.

In 2008, there were 174,623 emergency room visits in the U.S. where the primary cause for the visit was gout, with the cost of these visits reaching $182 million. An estimated 7 million ambulatory visits occurred annually in the U.S. associated with gout between 2002 and 2008, with total ambulatory costs associated with gout estimated at $933 million.

The recommended treatment for Colcrys is 1.2 mg (two pills, 0.6 mg each) at first sign of flare and 0.6 mg (one pill) one hour later, for a total of three pills total per treatment. This can be repeated on the second day. The cost of drug is approximately $6.00 per pill, so the range of costs (three to six pills) for treatment of a flare is $18 to $36.

AEs from oral colchicine will contribute to the cost of treating patients with acute flares. Some AEs will warrant other medications (to treat diarrhea, for example), and some AEs will lead to office visits or other care. The percent of patients with side effects is quite high, with the high dose (80%) and still significant with the low dose. Previous experience with these AEs can result in patients avoiding oral colchicine usage altogether at the early stages of a flare, opting for self-treatment with over-the-counter medications, such as NSAIDs, which can result in other AEs and treatment failure.

The costs and aggravation of AEs associated with oral colchicine might be somewhat more acceptable if it was highly effective limiting the symptoms and course of an acute flare. However, in a clinical trial evaluating oral colchicine dosing, only 38% of treated patients had at least 50% relief of pain. This suggests that 62% of patients will not get adequate pain relief from acute flares and have treatment-failure.

Many of these treatment-failure patients will seek other medical help, as the intense pain and suffering from the acute gout flare will continue. Some individuals will use other medications for pain and inflammation — e.g., NSAIDs. Others will see their physician for corticosteroid treatments. Added costs for these individuals would include the cost of the medication plus the office visit. One study noted that there were 50.1 million gout-related ambulatory visits from 2002 to 2008 in the U.S., with a corresponding cost of $1 billion annually.

The cost of treatment of an acute flare with ColciGel is very similar to those for oral colchicine.

Treatment typically consists of one or two pumps of ColciGel applied directly to the site of the flare when it is first noticed; this is repeated after one hour.

The cost per pump is approximately $6. This can be repeated on the second day if needed. This comes to two to four pumps per day for the typical treatment, with a range of two to eight pumps for treatment over two days. The typical costs would run between $12 and $48 per flare. If there are flares occurring simultaneously at more than one site, the typical costs could be higher.

Case studies demonstrate that ColciGel is effective and will be effective in many patients within a few hours following administration. Expanded statistics on what percentage of patients will achieve 50% or greater reduction of pain have not been compiled. Thus the costs arising from treatment-failures with ColciGel cannot be estimated.

ColciGel is supplied in a two-pak. Each box contains one 15ml MDose Dispenser and is distributed through specialty pharmacies. 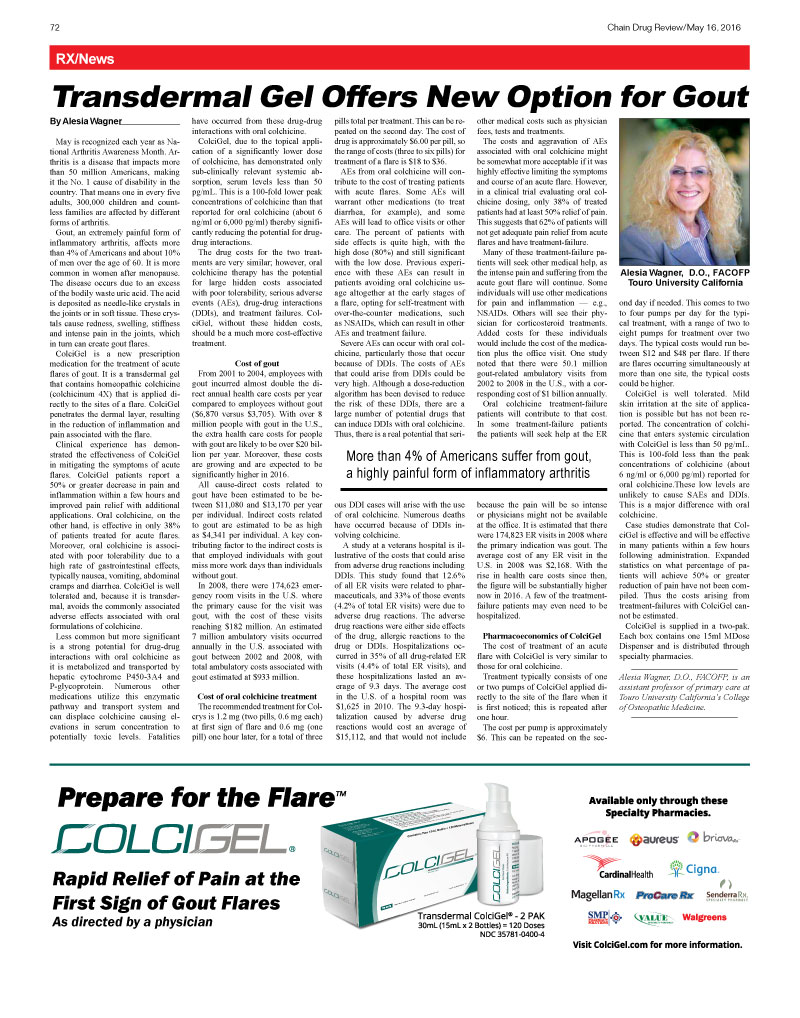