MIAMI — Gout is an extremely painful form of inflammatory arthritis and the most common form of this type of arthritis in men, according to Dr. Gary Myerson, a founding fellow of the American College of Rheumatology. Affecting more than 4% of Americans and an estimated 10% of men over the age of 60, gout causes the joints or soft tissue, most commonly in the foot, to become red, hot and swollen. Though more prevalent in men, gout can happen in women, but mostly in women post menopause. Myerson explains that gout is caused by an excess of the bodily waste uric acid, which is deposited as needle-like crystals in the joints or in soft tissue. These crystals cause the redness, swelling, stiffness and intense pain in the joints commonly associated with gout attacks. While initial gout symptoms usually consist of intense episodes of painful swelling in the feet — especially the big toe — Myerson says it can also attack ankles, heels, knees, wrists, fingers, and elbows.

One of the unfortunate aspects of gout, Myerson points out, is that it can strike without warning in attacks that are known as flare-ups. These attacks can last up to 10 days, according to Myerson, during which time the pain is often excruciating if untreated. “The secret to the treatment of the acute gout attack is to be prepared and treat the flare early.” To that end, Gensco Pharma — a specialty pharmaceutical company focusing on research, development and marketing of transdermal prescription products — has developed a new transdermal colchicine gel to treat these sudden flare-ups.

”The secret to the treatment of the acute gout attack is to be prepared and treat the flare early.”

According to Myerson, prescription ColciGel, transdermal colchicine, provides rapid relief of pain from gout at the first sign of an acute attack. Unlike colchicine pills, which are taken orally for gout, ColciGel doesn’t produce the often intolerable gastrointestinal side effects, Myerson says. The plant-based medication in ColciGel has been used as an anti-inflammatory treatment for ages, dating back to the Egyptian pharaohs and Native Americans, notes Myerson. At the first onset of an attack, the gel is to be applied directly to the site of the pain.

In private practice for 25 years, Myerson says his experience treating acute gout attacks with ColciGel has been very positive. He is overseeing a clinical investigation of the product beginning this summer. The goals of the investigation are to add to the existing clinical evidence of efficacy and to evaluate alternative dosing regimens.

In Myerson’s professional opinion, gout is a disease that has often been treated ineffectively. According to the Gout and Uric Acid Education Society, while nine out of 10 gout sufferers say gout has affected their daily lives, one in five isn’t doing anything at all to treat the disease — and only 10% of gout sufferers are getting needed treatment. Adding to that, many gout sufferers — 50%, according to Myerson — have comorbid conditions, such as heart disease and diabetes, which makes treating gout with other medication problematic. ColciGel has zero side effects and is applied directly to the site of the flare, he points out. Though some people, mostly men, develop gout due to a genetic predisposition, Myerson says ill-functioning kidneys, poor circulation and physical trauma to the foot are other typical factors leading to gout. As with other diseases, a healthy diet, active lifestyle and cessation of smoking can help prevent gout, Myerson adds. Patients who have an acute attack once per year usually go untreated other than with over-the-counter medications. The lack of a treatment regimen for these patients coincides with an increase of acute gout flares over time. Patients need to have ColciGel on hand at the first sign of the gout flare. Myerson says patients who experience more than one acute attack require additional and thorough professional care. Though gout attacks often subside initially, as time goes on the attacks last longer, happen more frequently and eventually may cause permanent damage in fingers, knees and other affected joints, disabling the individual who suffers with it.

Co-pay assistance and cash pay voucher programs are available to all patients through participating specialty pharmacies, according to Gensco Pharma. “As a pharmaceutical manufacturer, we have a responsibility to provide access to safe and effective medications. We recognize the need to assist with the financial burden as our duty,” says Carlos Alfaras, chief executive officer of Gensco Pharma. “Our corporate focus is to utilize our resources on innovative research and the development of unique delivery systems, and it aligns with our specialty partner’s efforts to improve access and the quality of life for patients who suffer from debilitating diseases. The Gensco Specialty Pharmacy distribution partnerships foster the growing need to focus on disease states which our new transdermal ColciGel serves.” 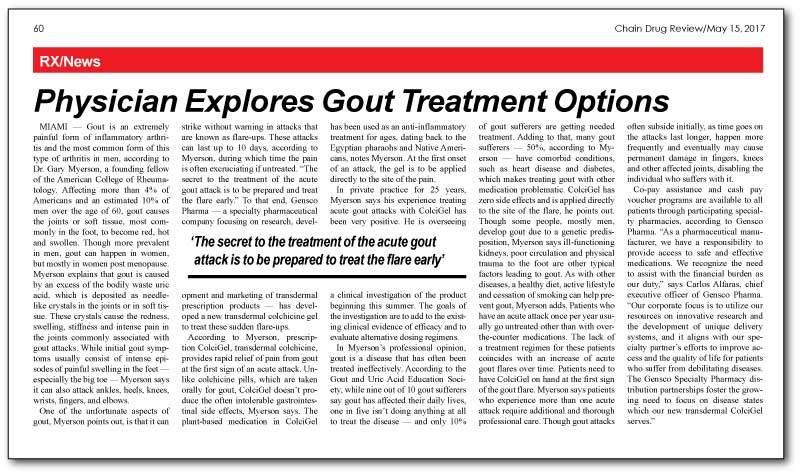