Executives at Gensco Laboratories say the studies show that the company’s prescription-strength, homeopathic transdermal pain and inflammation gels are extremely effective at treating these conditions.

President and chief executive officer Carlos Alfaras notes that in a study done at the Andrews Institute in Pensacola, Fla., earlier this year on people suffering from pain after knee and shoulder operations, Gensco’s SpeedGel Rx was found to provide so much relief that these patients were able to stop taking a narcotic pain reliever. And a second study conducted earlier this summer found that SpeedGel showed what Alfaras calls “tremendous results on bruising after just six days.”

Further studies are under way to determine the formula’s effect on bone bruising, he says.

“As only laser-induced bruising on the inner arm was studied, it remains to be seen if this result can be generalized to postoperative bruises of other etiologies and at other anatomical sites,” the company wrote in its report on the study. “It is also interesting to speculate whether pretreatment with SpeedGel Rx would be protective against postoperative bruising.

Alfaras says Gensco’s products and the studies that support their effectiveness are just the first steps in making transdermal medications more widespread. “We are just touching the potential of what can be done transdermally,” he says. “This is a delivery system that has boundless potential.” Alfaras notes, for instance, that Gensco is on the verge of beginning a clinical study on a transdermal medicine to treat gout. A study on a cancer drug is about two years away.

All of Gensco’s formulas — SpeedGel Rx, Lido Rx and Tranz Gel — are offered in metered doses to ensure that patients use the correct amounts.

“With pills and capsules and even with certain liquids, it’s easy to measure out the precise dose,” Alfaras says. “With a gel, however, it’s not nearly as easy. That is why we developed the metered dosages. We wanted to make sure the patient is using the exact amount that the physician prescribes.”

Alfaras notes that transdermal medications differ from topical formulations in that they penetrate deep into the body’s tissues. For its part, Gensco uses a patented isopeutic technology that sends the medication directly to the injured tissues beneath the skin.

As the medication is rapidly absorbed through the skin, the process of healing and inflammation relief can help the patient recover more quickly and efficiently, Alfaras says. 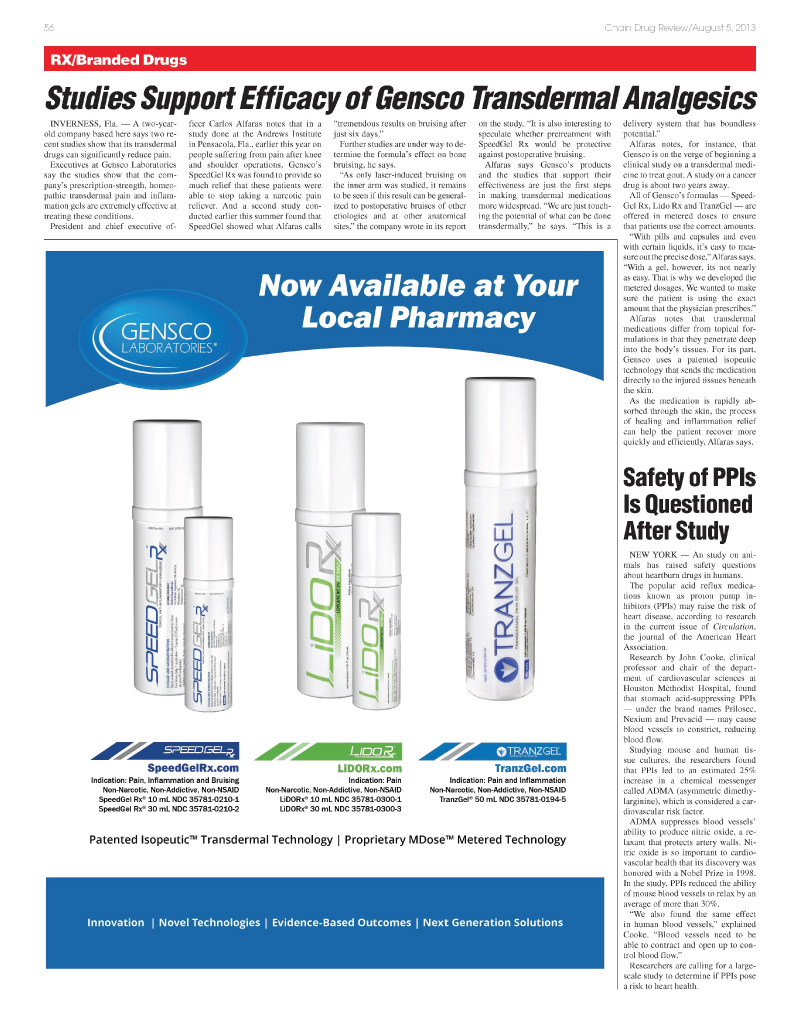