All children should receive the flu shot as soon as it is available: AAP

ITASCA, IL. – The American Academy of Pediatrics (AAP) recommends that all children ages 6 months and older receive a flu shot this season with the goal to provide the optimal protection against all strains of influenza, a serious illness resulting in a record number of pediatric deaths during this past year.

The annual flu vaccine significantly reduces a child’s risk of severe influenza and death, according to the AAP policy statement, “Recommendations for Prevention and Control of Influenza in Children, 2018-2019,” to be published in the October 2018 Pediatrics (published online Sept. 3).

“The flu virus is common – and unpredictable. It can cause serious complications even in healthy children,” said Flor M. Munoz, MD, FAAP, member of the AAP Committee on Infectious Diseases. “Being immunized reduces the risk of a child being hospitalized due to flu.”

The 2017-2018 flu season became one of the most severe seasons on record, excluding pandemics, according to the U.S. Centers for Disease Control and Prevention.

As of Aug. 18, 2018, a total of 179 children died of influenza-associated deaths, and thousands more were hospitalized. About 80 percent of the children who died had not received a flu vaccination, according to the CDC.

“Staying healthy is the goal for all of us. As a pediatrician and mom, I see too often how quickly the flu spreads,” said Wendy Sue Swanson, MD, MBA, FAAP, a pediatrician in Seattle and an AAP spokesperson. “Unfortunately, you can spread influenza without realizing it because some infected people begin to spread the virus a day or two before they have symptoms. Get the shot. It just makes sense.”

This season, the AAP recommends that pediatricians offer the injectable form of the vaccine to all children 6 months and older as soon as it becomes available, preferably by the end of October. The AAP recommends the injectable flu vaccine as the primary choice for children because it has provided the most consistent protection against all strains of the flu virus in recent years.

The AAP and CDC also support the use of the nasal spray vaccine – or live attenuated influenza vaccine (LAIV4) – for the 2018-2019 season with the aim of adequate vaccination coverage and optimal protection in children of all ages.

Therefore, AAP recommends the flu shot as the first choice for children. The nasal spray vaccine may be used this year for children who would not otherwise receive the flu shot, as long as they are 2 years of age or older and healthy without an underlying medical condition. For instance, if a child refuses the flu shot, or if the physician’s office runs out of the injected vaccine, the nasal spray would be appropriate.

The AAP recommendations also include:

The influenza vaccine is given by injection into the muscle and is inactivated, meaning it does not contain a live flu virus and cannot cause the flu. This season’s flu vaccine has either three (trivalent) or four (quadrivalent) virus strains. Neither vaccine formulation is preferred over the other. Compared with last season’s vaccines, the 2018-2019 vaccines contain one new strain of influenza A (H3N2) and one new strain of influenza B (Victoria lineage).

“The effectiveness of the flu vaccine varies and is affected by factors such as the child’s age, health status, vaccination history and the strain of influenza circulating in a community,” said Henry Bernstein, MD, MHCM, FAAP, a member of the CDC Advisory Committee on Immunization Practices and an Ex-Officio member of the AAP Committee on Infectious Diseases. “We urge parents to talk with their pediatricians now to avoid any delay in getting their children vaccinated.”

The American Academy of Pediatrics is an organization of 67,000 primary care pediatricians, pediatric medical subspecialists and pediatric surgical specialists dedicated to the health, safety and well-being of infants, children, adolescents and young adults. For more information, visit www.aap.org and follow us on Twitter @AmerAcadPeds 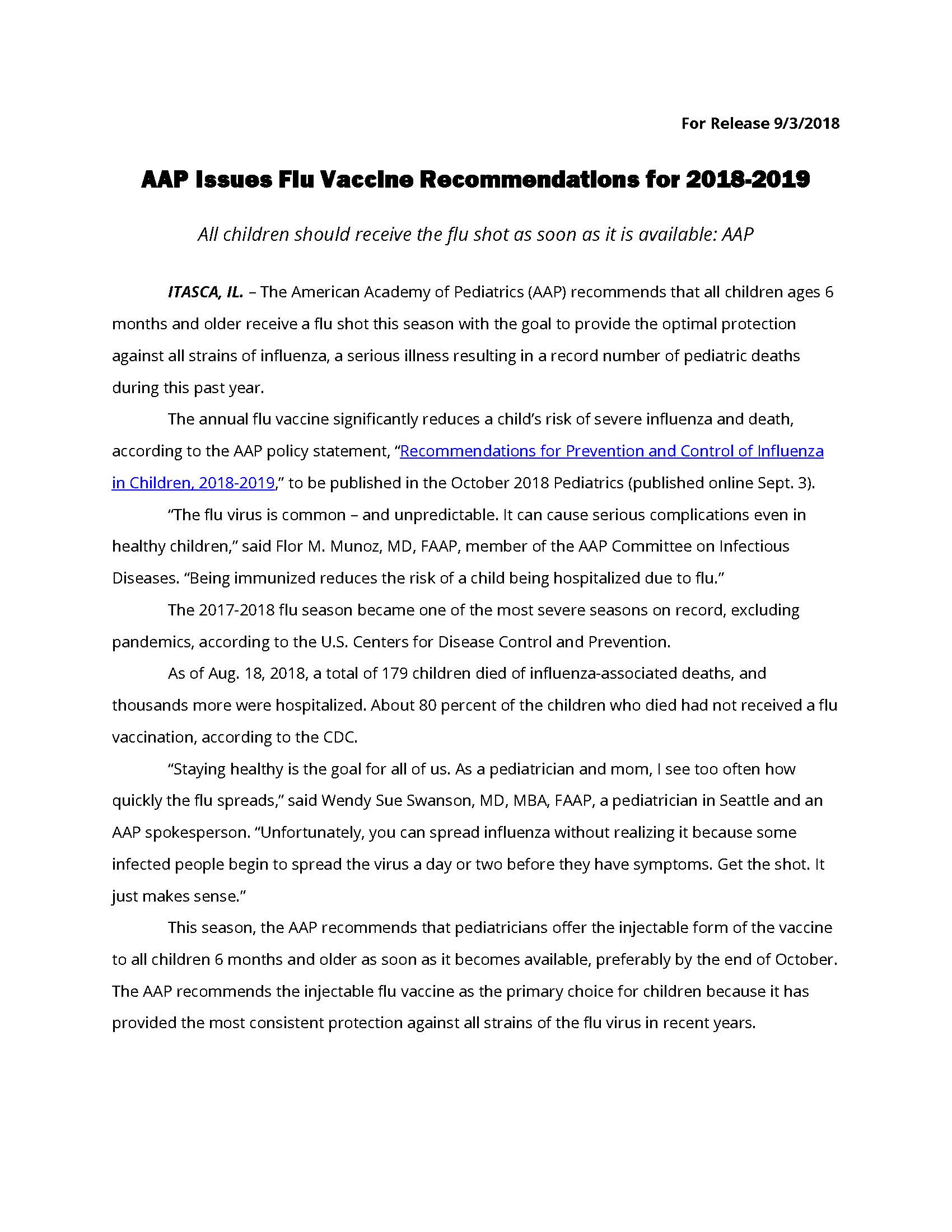